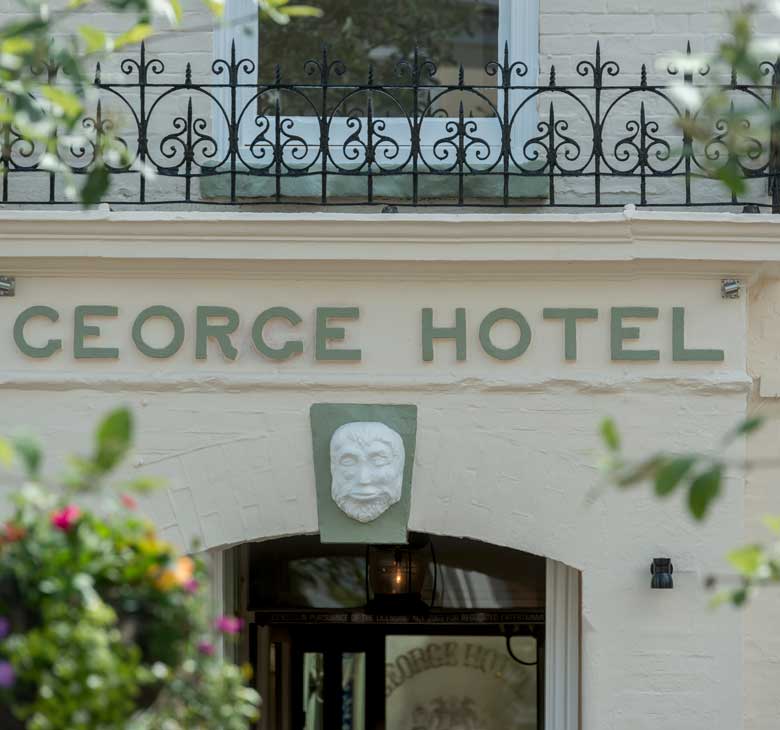 The George – The Old Posting Tavern or Inn

The George is situated in the Broad Street or Square of the Loyal and Ancient Borough of South Molton. The town itself originated in Saxon times, about five or six hundred years AD, when it was called “Sut Moltana” and gave its name to “hundred”. It has been a market town for about a thousand years, and received its first Royal Charter during the reign of Queen Elizabeth I in 1590. This was renewed by King Charles II in 1684.

The earliest name for The George is unknown, but in the eighteenth century it was called “The Posting Tavern”. Previous names which are mentioned in ancient records are “The Old Coaching House” and “The Globe”. In those days the carriages and horses passed through the hotel where the front entrance is now. The carriage way from the Broad Street can still be seen in the cellars, where a stone arch forms a bridge-like structure which crossed the causeway. A high level door, since converted into a window, was used to lift the luggage from the top of the carriages to the first floor. In the 1730s major renovations and re-building were carried out, including the elevation as it is today. The carved keystones over the windows and main entrance came from Stow Mansion in Cornwall, which was dismantled at the time. It is interesting to note that many of the materials used for the rebuilding of the nearby Town Hall originated from the same source. It was after these alterations that the hotel was re-named The George.

For generations travellers stopped at the hotel, since it lay on the Barnstaple to London coaching route.

It is interesting to reflect upon the scenes the hotel has witnessed. The skirmish between the Roundheads and Cavaliers in 1655, for example, and a few years before in 1642 when a “Commission of Array” was to be proclaimed in the town. The assembled notability, whilst enjoying a venison banquet, met with spirited resistance from the mayor and townsfolk who warned them that “if they attempt anything there, or read their Commission of Array, they would beat them all down and kill them. A crowd of at least a thousand armed with pikes and clubs, black bills and halberts, and even rams horns to throw, drove the intruders out of town.

During the nineteenth century, frequent visitors to The George included The Reverend Jack Russell, the famous hunting parson whose name is given to the Jack Russell Terrier. Indeed, for close on a hundred years the local pack of hounds was kennelled here, but this ceased during the first world war. Parson Froude, the notorious Knowstone cleric, once made one of his audacious speeches at the hotel in the presence of Bishop Philpotts. Also, the colourful Exmoor character and poet, Dicky Slader, was a frequent visitor. The George is mentioned in R.D Blackmore’s novel Lorna Doone and has always been a meeting place for huntsmen and farmers on this side of Exmoor.

At one time the Dining Room was used as a Playhouse. Still in existence is a bill advertising a performance of “Macbeth” on the premises. In 1830s a room was converted into a Masonic Temple and meetings were held here for a few years.

The present management took over in 2016 and are taking great care in enhancing the public and private spaces ensuring all who visit a comfortable and enjoyable stay.